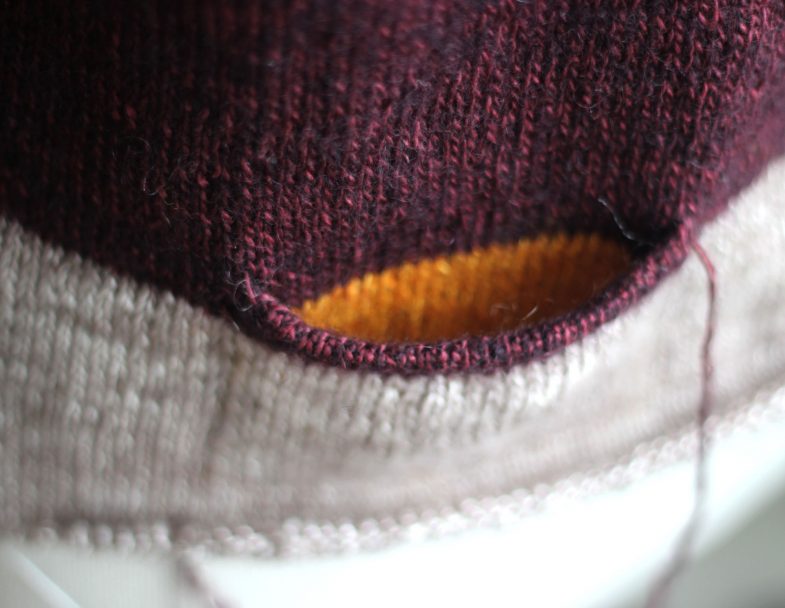 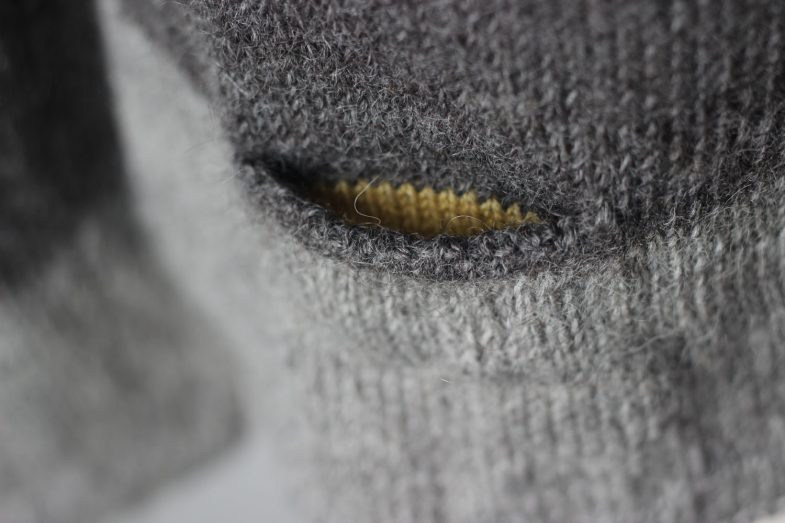 This single layer Flap pocket is constructed like  the Mayhem cardigan dk pocket – a lining flap is worked as an extension in the front fabric of the pullover and then attached to the wrong side of the fabric as you continue knitting the pullover rounds towards the hem.

The Flap pocket is easier than the double-knitted version of the single layer pocket featured on the Bambasala cardigan, the Bento Boksy pullover, and the Vaudeville tunic.

And no… I couldn’t resist tweaking precisely how the lining flap is attached.  Just a little… so this pocket differs a smidge from the Mayhem cardigan pocket.

Another difference: the Mayhem pocket has no edging – the ribbed fabric of that cardigan keeps the edge from rolling or expanding. A prepared folded Welt does the trick on plain fabric pullovers like Sammelsurium and Simple Ziggurat.

How to knit the Flap Pocket with a Welt Edging
(In the Ziggurat Book this is a variant of pocket 2c.)

The stitch counts given below are for the mini pocket on Sammelsurium (the grey pullover) – 17 sts wide. The maroon pullover with the orange peekaboo lining is a (forthcoming) Faery Wings Simple Ziggurat. That pocket is 25 stitches wide. You can of course make the pocket wider or smaller as you please.

Stitch count guide for wider or smaller pockets:
A = width of pocket

With N2, a separate ball of MC, and using the Winding Provisional Cast On, wind on 17 (A) sts.
Note: in the photos I used a contrast yarn for better visibility

Slip the provisional sts onto a spare needle (N3), fold Welt double with RS facing out, N2 in front of N3, tips parallel and pointing in the same direction. With N2 knit the two layers together, working 1 stitch from N2 and 1 st from N3 for each k2tog. 17 (A) sts 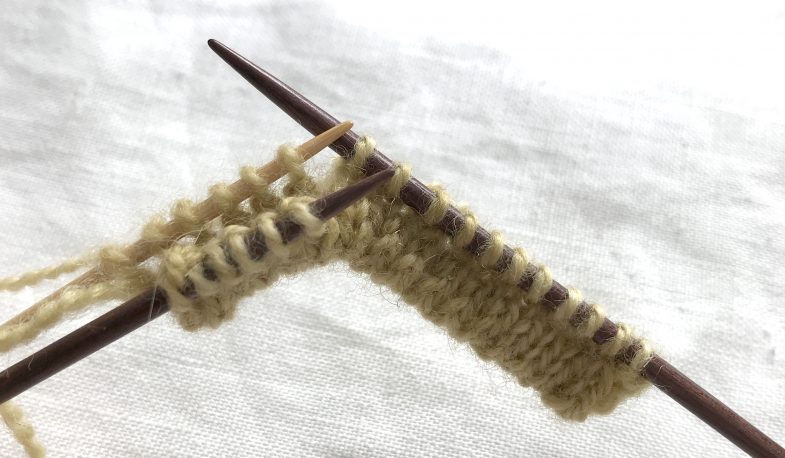 Knitting the folded Welt together

Sammelsurium and Simple Ziggurat have a contrasting band on the lower part of the body. The Welt is attached over the 3 final rounds of main colour (MC). The instructions below reflect this. If you are not using a contrast colour (CC), ignore the instruction to change colour.
On the 3 attaching-rounds the live Welt stitches on N2 are not worked but left alone. 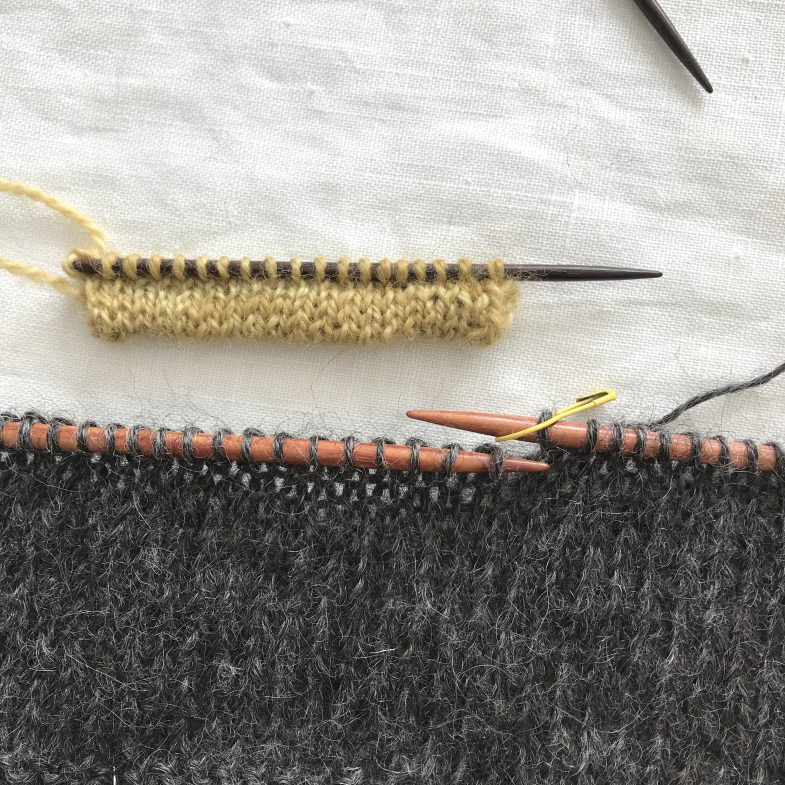 Welt ready to be attached, Pocket marker (Pm1) is placed (slide Welt sts onto the cable of N2 so that the Welt is easier to manipulate) 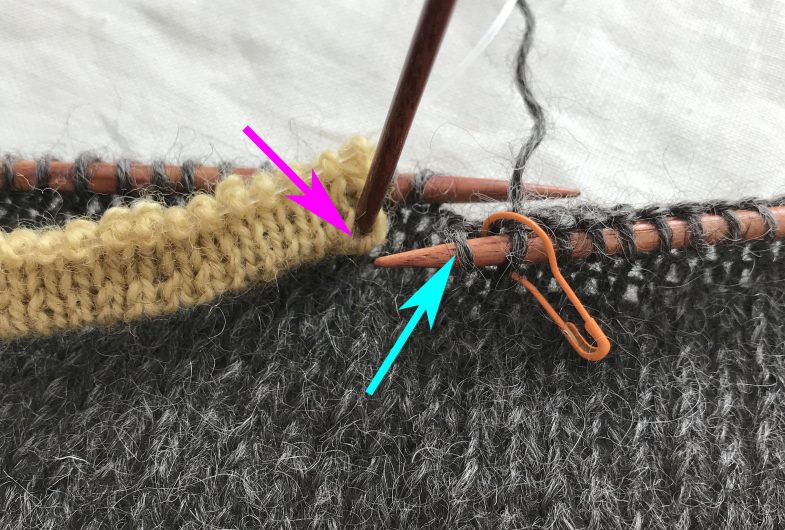 Slipped stitch (blue arrow) and  corner of Welt (pink arrow) through which to fetch yarn (Pm1 is orange in this photo, sorry!)

Rnd 1 (cont): Sl1 kwise, insert RN tip (or use crochet hook) into outer corner of Welt to fetch yarn through both layers… 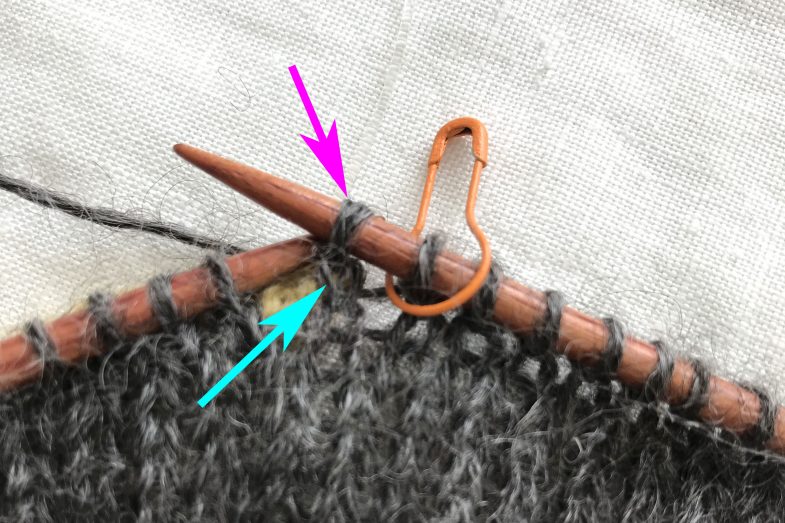 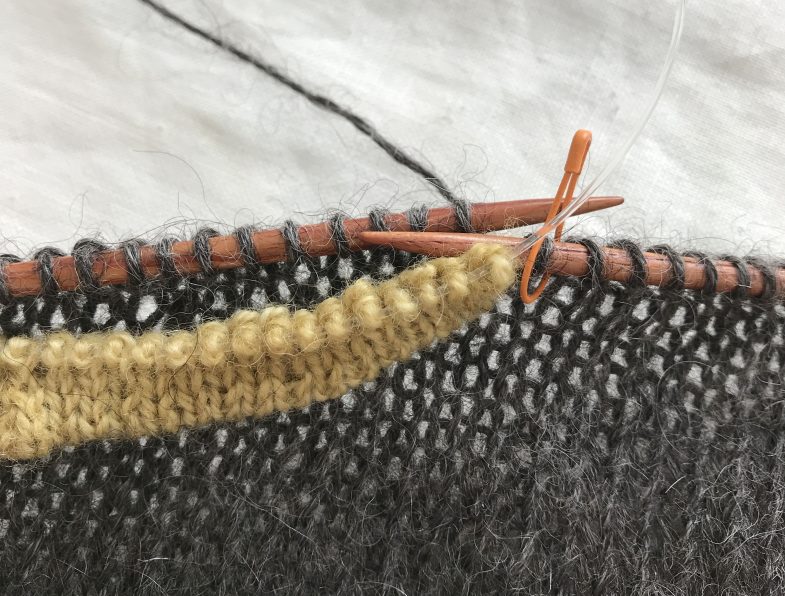 If your Welt has slipped behind, swing it between the needle tips to front of work (so you can work the Body stitches (grey)

It’s time to attach the far end of the Welt: 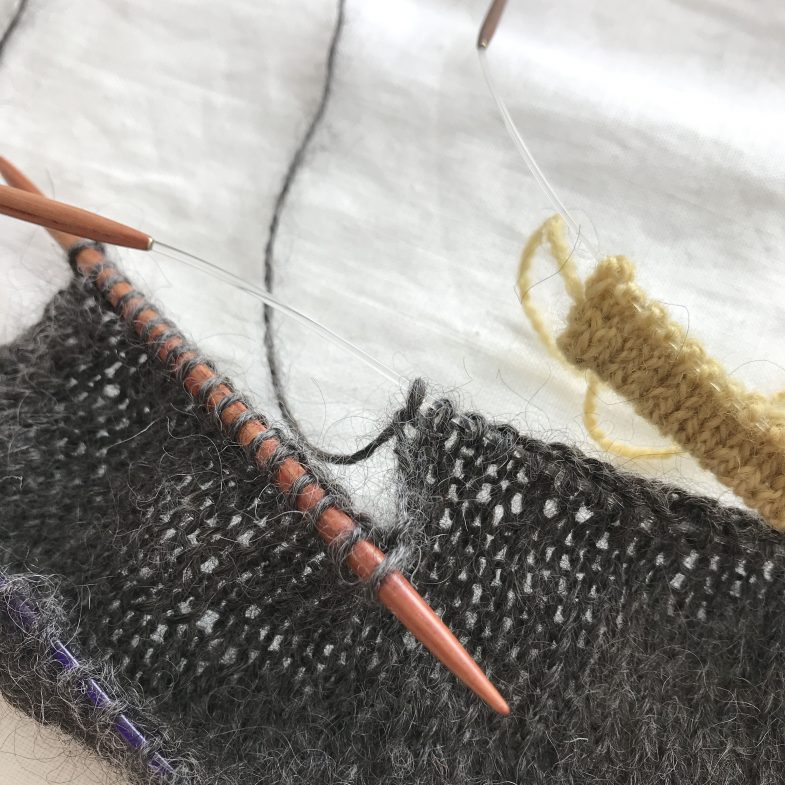 Before attaching the far end: slide stitches on N1 Right Needle tip onto the cable (this makes it easier to make the attachment manoeuvre) 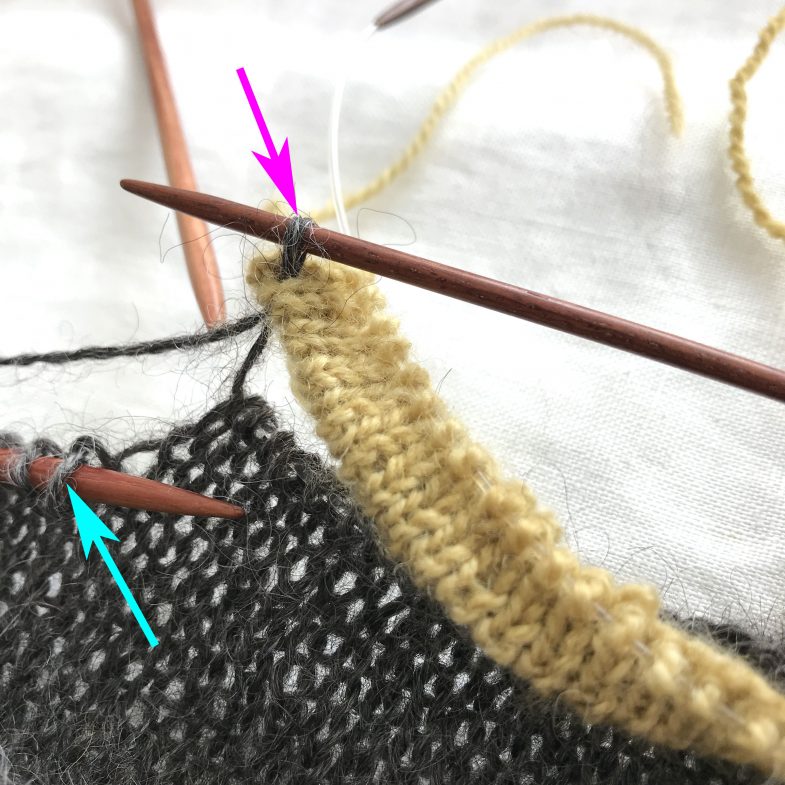 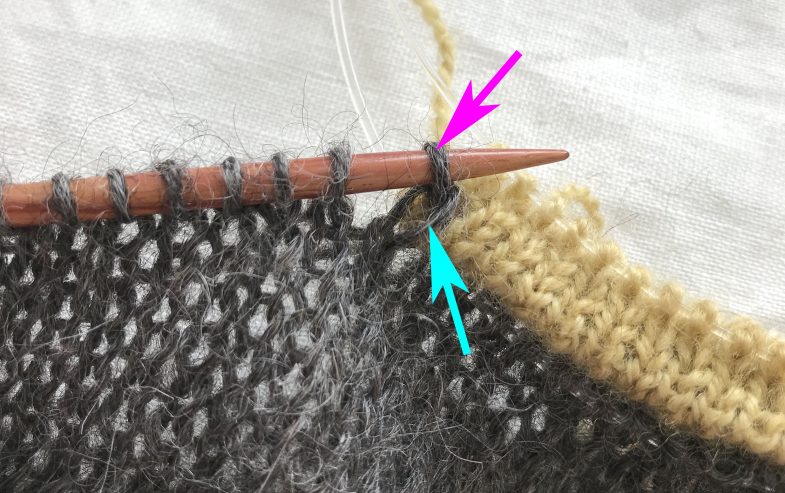 Rnd 1 (cont):…pass next Body stitch over and off LN, (slide N1-stitches from cable back onto Right Tip), slip resulting stitch to RN, pm (Pm2), work to end of round. Rnd 1 is complete. 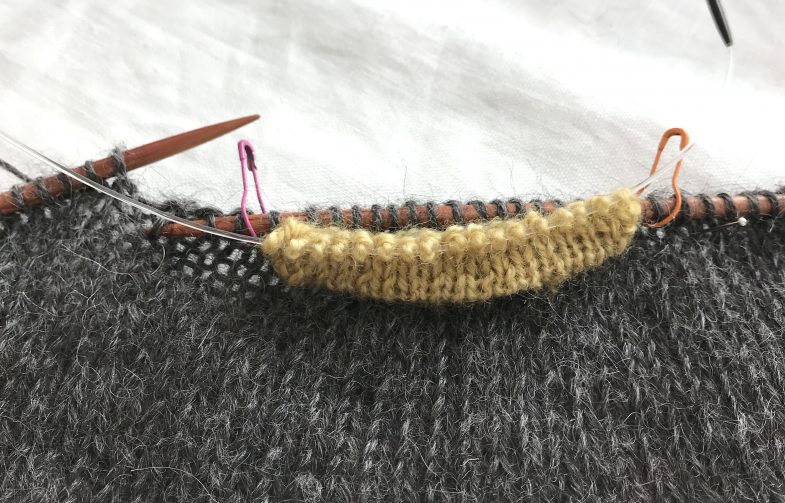 Now, simply complete the round. The Welt is attached at each corner but is otherwise hanging free

Rnd 2: As Rnd 1, but attach Welt through stitch above the previously attached edge stitch (and slip instead of place markers). 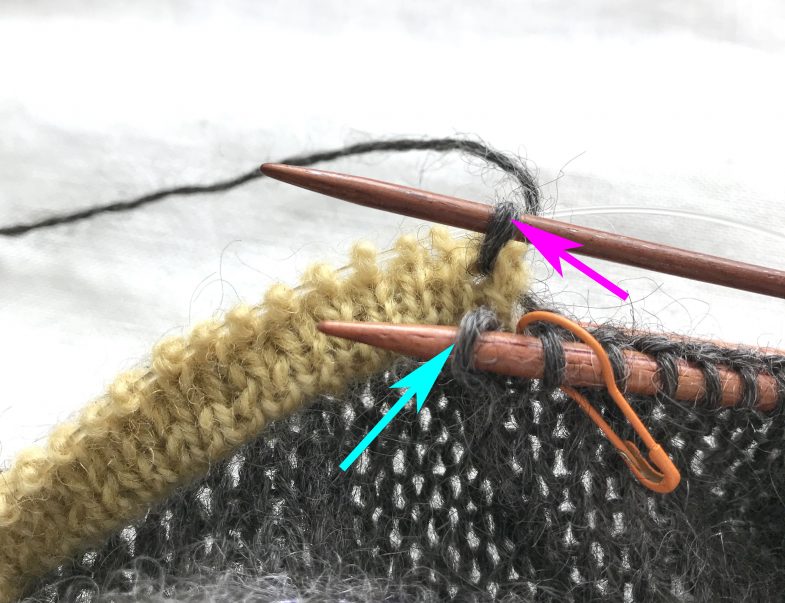 Rnd 3: As Rnd 2.
(If MC is darker than CC, also work Optional Rear Shaping (see pattern), cut MC. If instead CC is darker, work the rear shaping on the second round of CC). 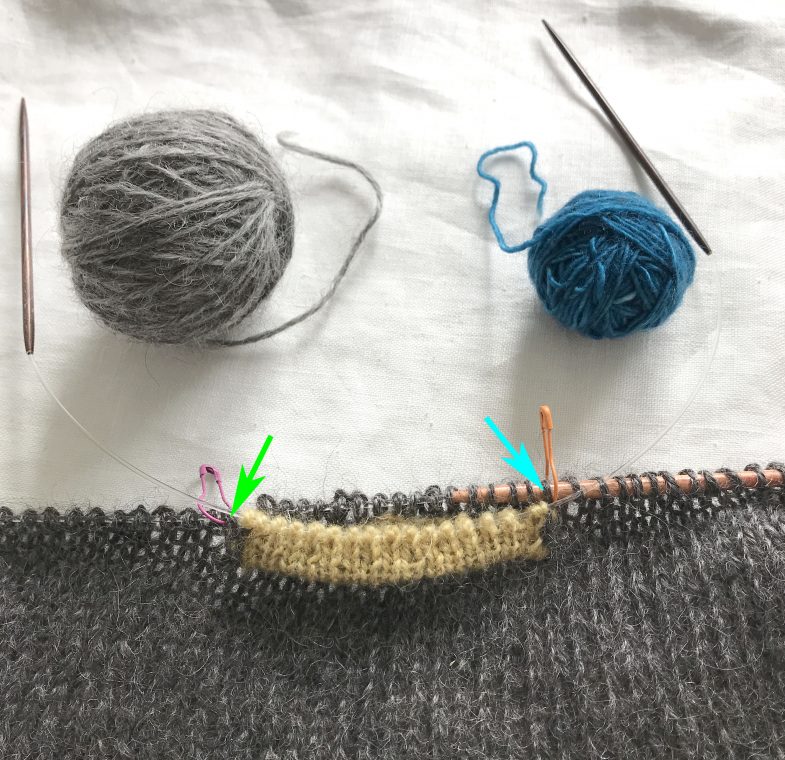 On the first Round/Row of Making the Lining Flap, the WELT is integrated into the Body sts and becomes the front of the pocket that bridges the opening. The Welt and Body sts are then set aside while you finish the Flap. The blue arrow points to the Body stitch (after Pm1) that is worked as an SSK together with the first Welt stitch. The green arrow points to the stitch before Pm2. This stitch is worked as a K2TOG with the last Welt stitch – but only AFTER the lining Flap has been knitted.

Rnd 1: With CC1, knit to Pm1, sl next stitch onto N2 (the Welt needle), ssk, (one Body stitch tog with first Welt stitch), then continue with N1 along Welt stitches; knit to last Welt stitch, sl1, set N1 aside (no stitches remain on N2).
Pull on N1 Right Tip to slide stitches onto the cable.

The lining is worked flat, back and forth with N2 and  CC2 (blue yarn). 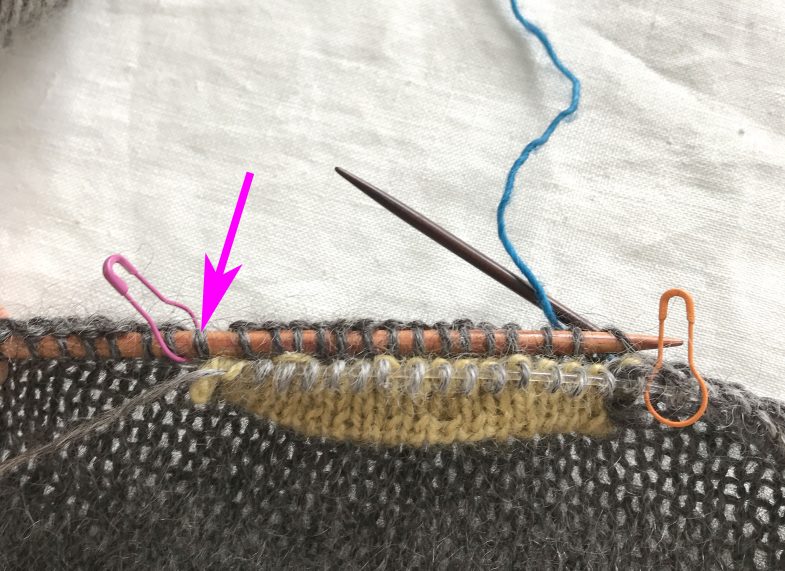 Welt stitches have been knitted to the last st with CC1/grey yarn and then pushed onto cable of N1 and set aside until later. With CC2 and N2 (smaller needle), now work the Body stitches on N1 to 1 stitch before Pm2. The pink arrow points to this last stitch (which is knitted together with the last welt stitch AFTER the Lining Flap is complete). 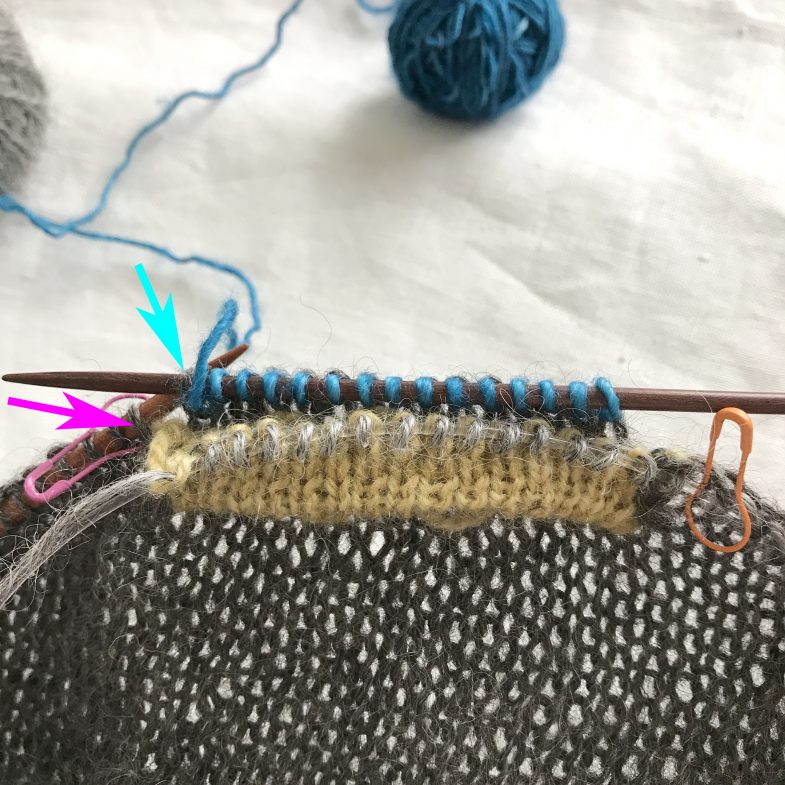 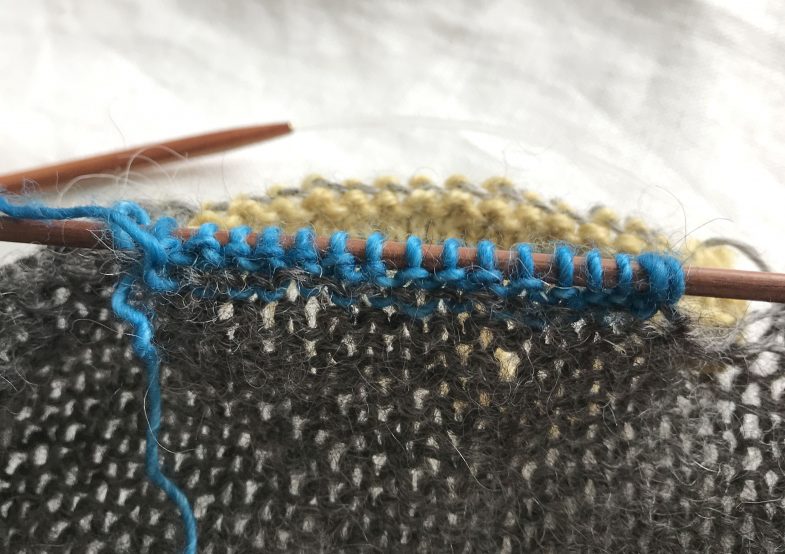 Cut CC2 (or leave attached for later adjustment of pocket depth). Slide stitches onto cable and set aside. 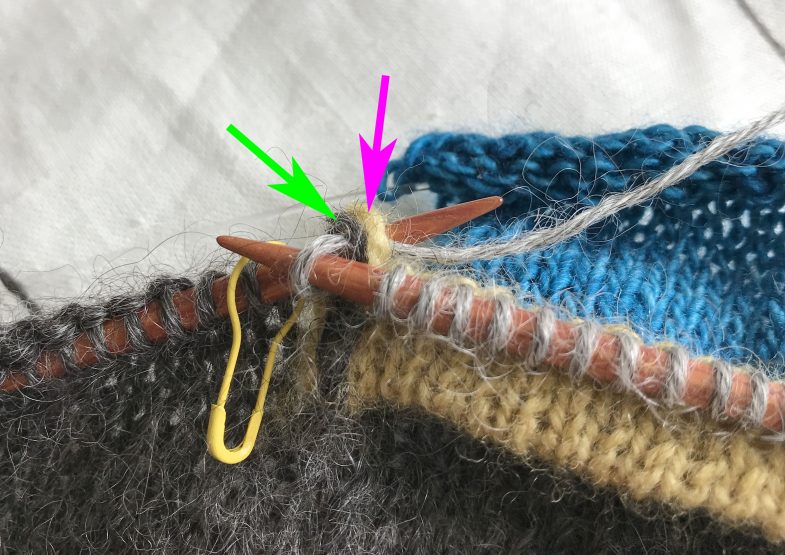 Lining Flap is complete, the last Body stitch (green arrow) before Pm2 is knitted together with the final Welt stitch (pink arrow) 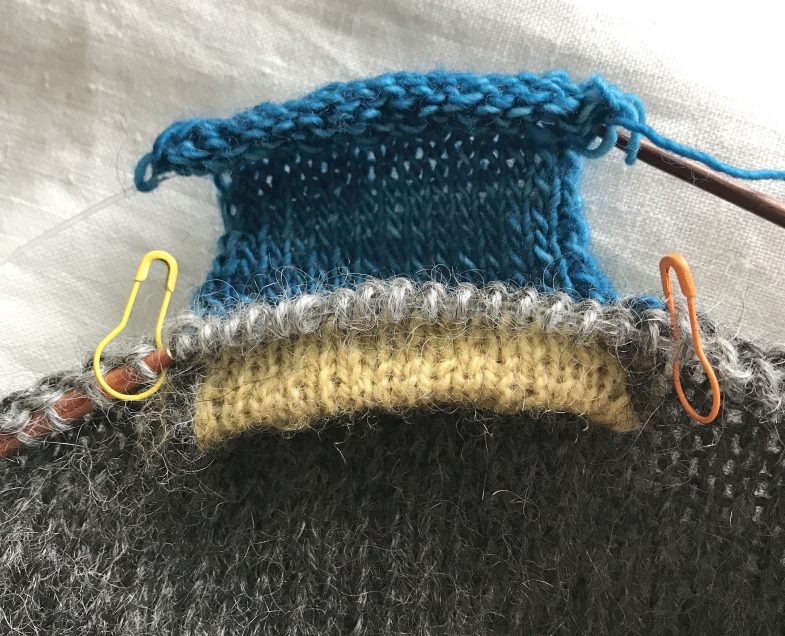 Lining Flap is done, first round of CC1 is complete. You will now attach the flap along each edge on every second round 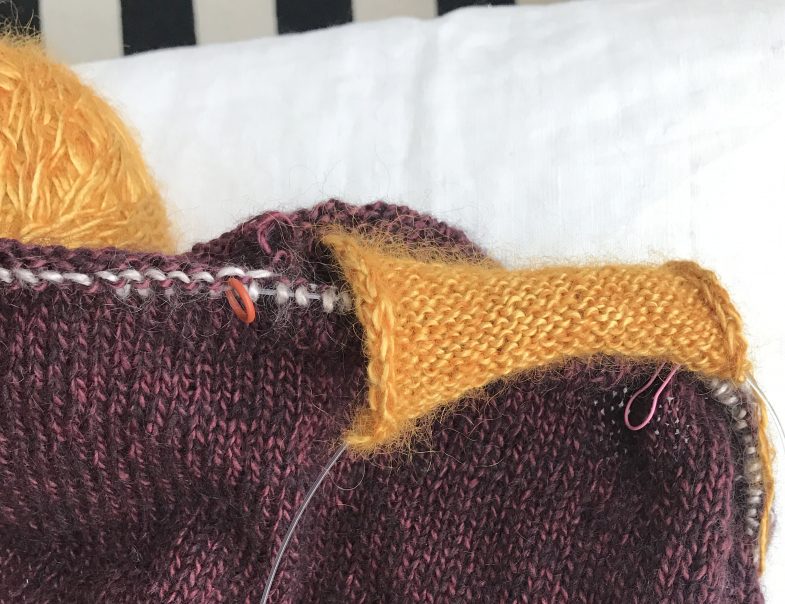 The lining is joined to the body on every second round.
Note: fetch yarn through both legs of the slipped edge stitch. 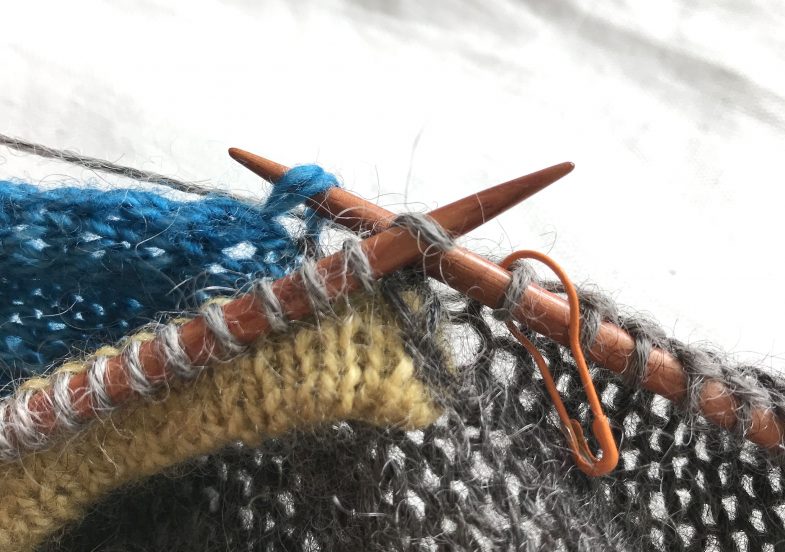 The first Body stitch after Pm1 is knitted together with a Lining Edge stitch – if you find it difficult to do this as one movement, it may be easier to first slip the Body stitch knitwise, then fetch yarn through the edge stitch (through both legs), then pass the slipped Body stitch over. 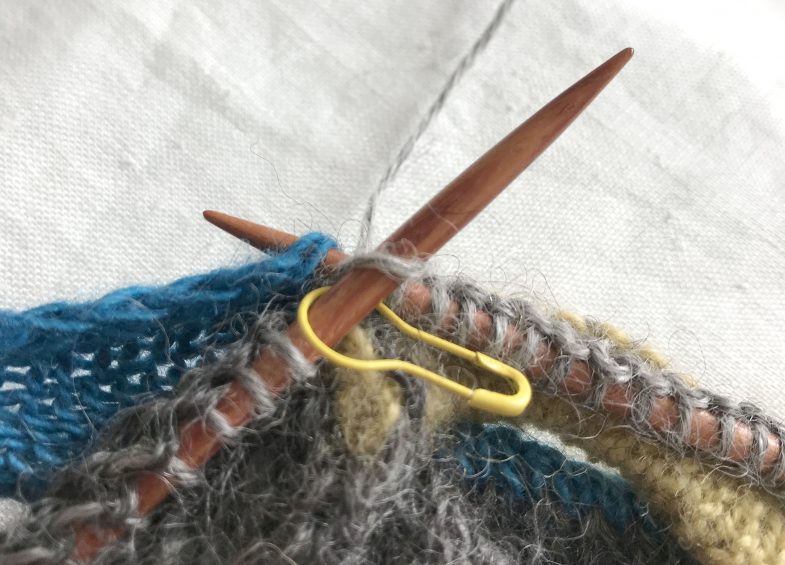 Rnd 1 continued: …knit to 1 stitch before Pm2, knit this stitch together with edge stitch of lining (going through both legs), sm, work to end of round (and pay attention to the g1-stitch along sides and to waist shaping). 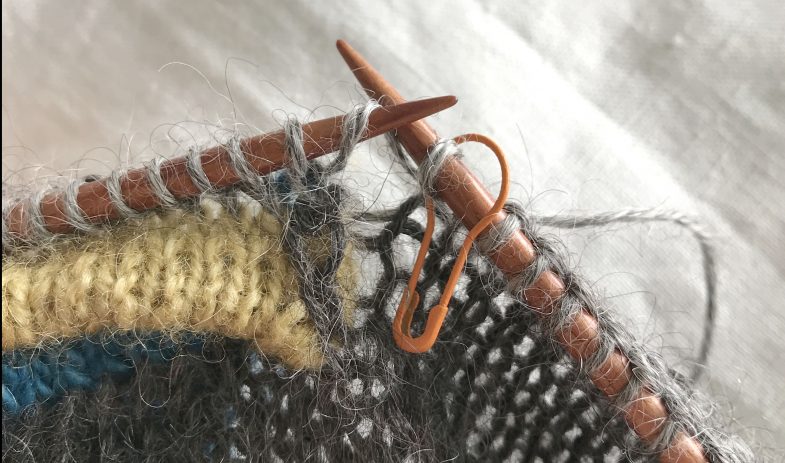 Rnd 2: Bar between stitches is worked together with first stitch after Pm1

Rnd 2: Knit to Pm1, sm, make twisted loop in bar between sts and place on LN… 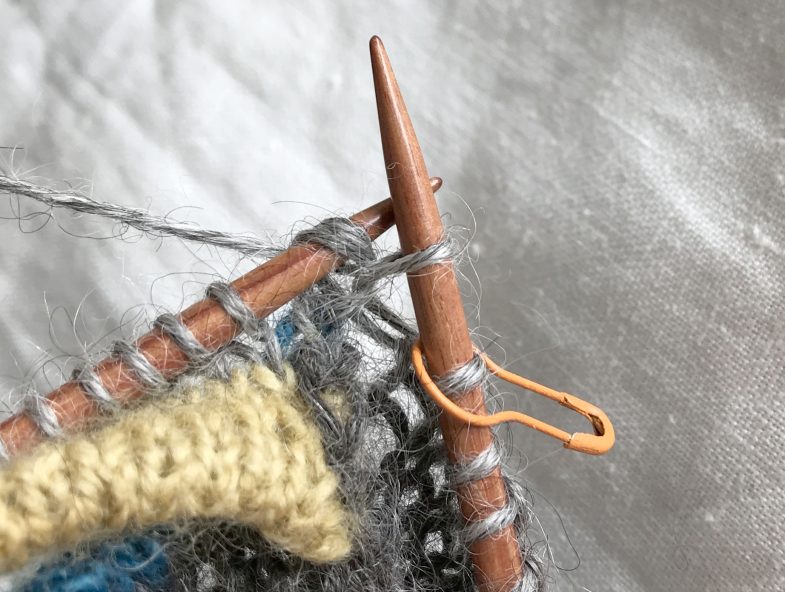 The stitch after Pm1 is knitted together with loop-stitch

Rnd 2 (continued):… k2tog (body stitch together with loop), work to end of round.

Work Rnds 1 & 2  until body is level with lining or just slightly longer: 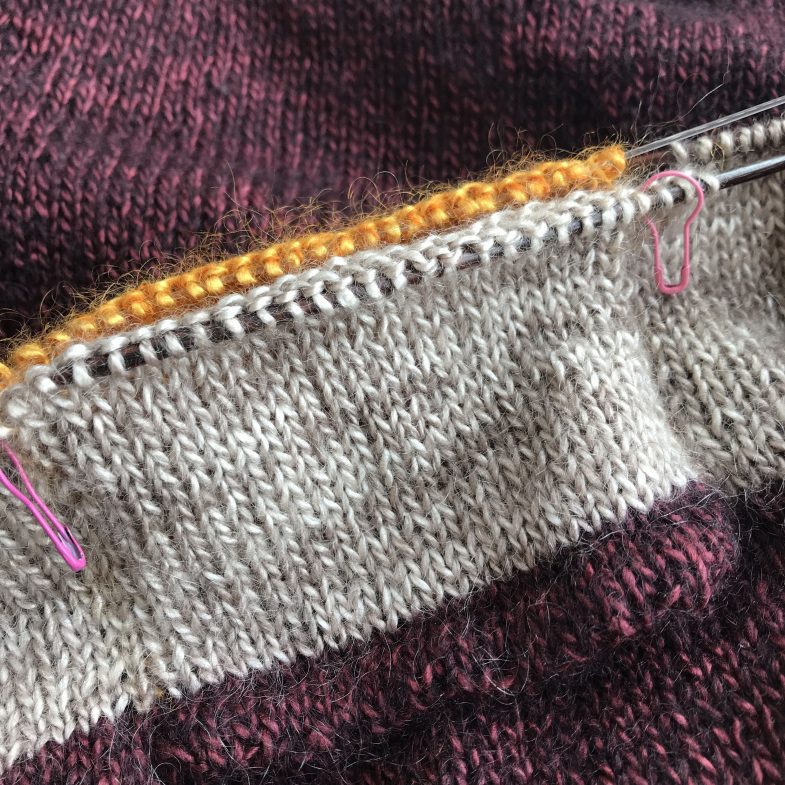 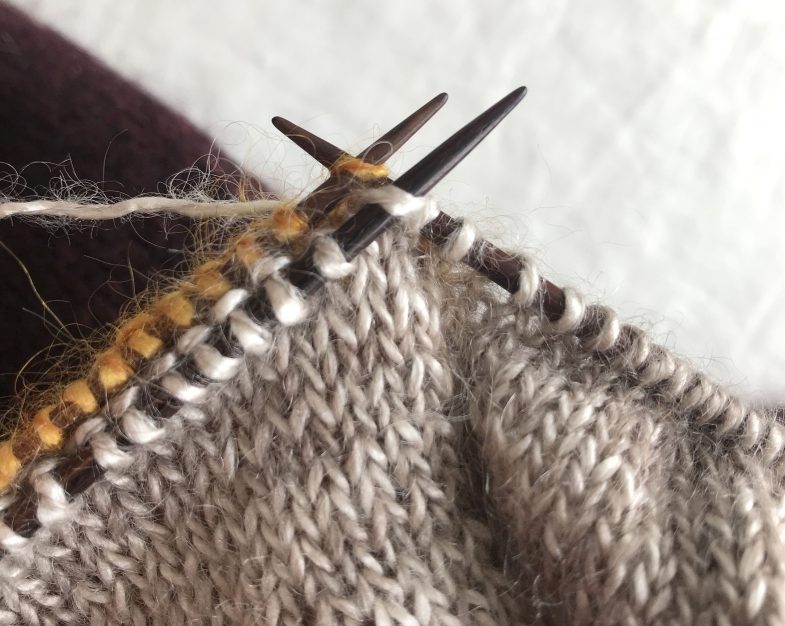 The Flap pocket can be made with different prepared edgings. For example, the Coucou tunic has a small cable that is attached as above – stitches are picked up along the cable edge to bridge the gap across the pocket opening: 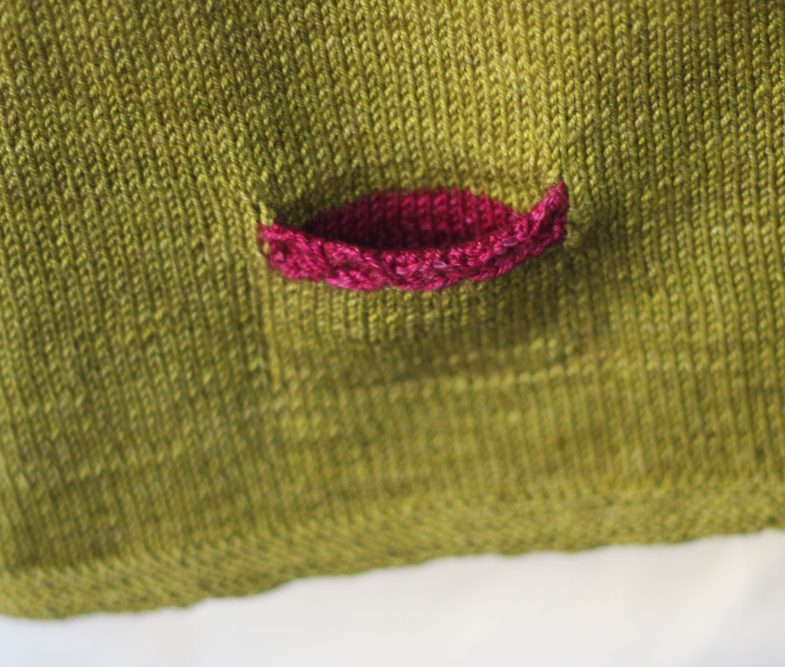 Or you can make a striped Welt… 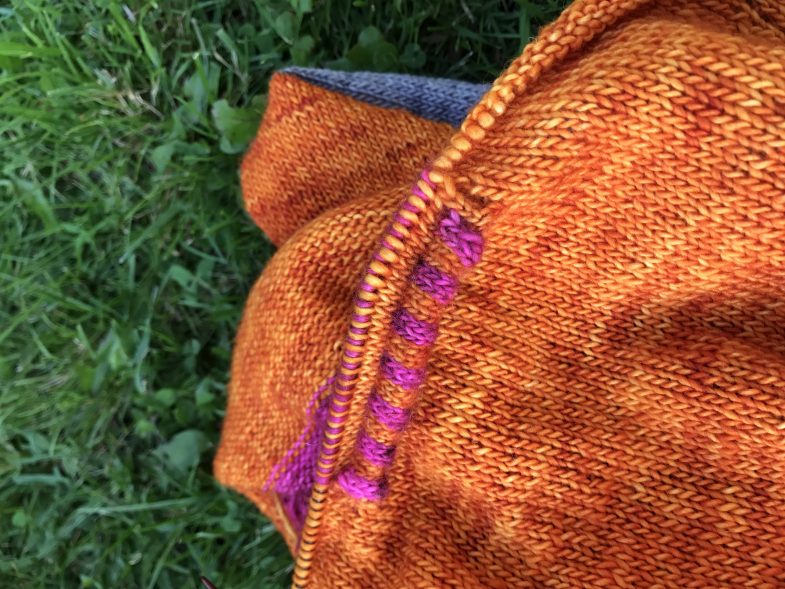 or a two-coloured Welt as on the Vaudeville tunic (single layer, double-knitted pocket and lining): 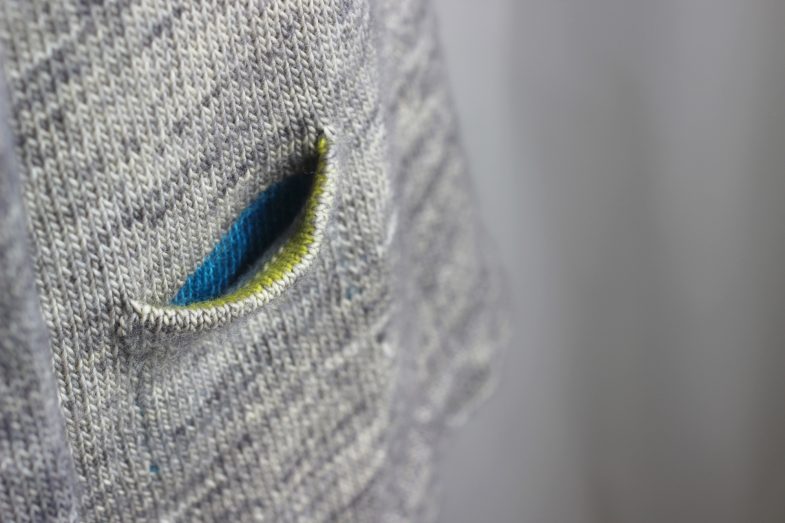 Or a tightly knitted striped passe-partout that is almost like a cord – as on Bento Boksy (this pocket is also double-knitted, but I think I will knit my next Bento Boksy with the easier method of the Flap pocket): 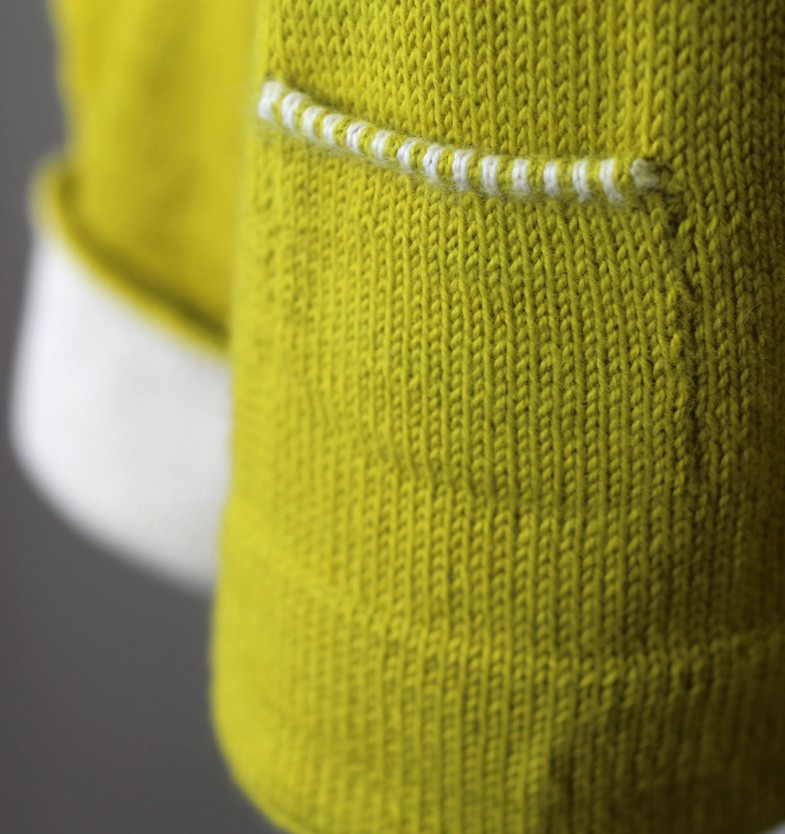 Want to know what else is up my knitted sleeve? Sign up for the occasional Åsa Tricosa Newsletter.

Thank you! It was so nice to see you again – but yes, I think that you don’t need ANY workshop in ANY technique as you are a master knitter.
See you next time! You can stop by for a chat after the workshop… 😉
åsa
p.s. I forgot to properly introduce you to Annette – she and you share the sewing bug.

Hi Asa, I am thoroughly enjoying making the pocket for my Sammelsurium. I am working on connecting the lining to the body. On round two, above, it says to tighten the first stitch after the pM1 by looping and knitting 2 together, but I am thinking that I should have used the same maneuver at the other corner of the pocket at pM2, rather than knitting across the rest of the round. The left side of the pocket edge is looser and my contrast colour for the lining is showing a bit. Am I correct??

Hello Jennifer!
Personally, I tighten it only at one end (the make-loop/decrease) where (for me) there is some extra slack. But, of course, if you find that your knitting have any gap, you can go ahead and tighten them in either the same way or some other way that makes it look pretty. It’s a judgement call and may vary from pocket to pocket and sweater to sweater. (Often, you can also tighten any slack after the fact by pulling on the yarn to redistribute the ‘extra’ across several stitches, away from the gap.) Good luck!

The welt looks lovely. I wonder if this could work on a bottom-up construction.

Yes, I should think so… at least in some fashion. The edging on one of the pockets in the Ziggurat Book is worked upwards from the pocket opening. You’d need to figure out how to close the welt or graft it to the outer layer?